The Most Important Shifter Improvement for MK5 and MK6 Volkswagens.

We really love Mk5 and Mk6 Golfs and Jettas but the 2008 and newer shifter has one particular point where design compromises have led to less than stellar shifting. The side to side bellcrank on Mk6 uses a riveted pivot pin and a single, very low quality plastic bushing. This results in slack in the side to side direction which affects shift gate selection accuracy.  Watch the YouTube videos below but watch them on YouTube so they can be seen at their full size. That excess play you see in the video results in Mk6 shifter performance which isn't up to spec to the rest of the car. Bring your later MK5 and MK6 shifter up to the level of the suspension, chassis and ergonomics with the Dieselgeek Super Pin and First Gear Getter combo. Our Made in USA stainless steel Super Pin and custom bushings replace the normally non-serviceable shifter pivot pin. This super set includes the First Gear Getter and now the side to side Cable Saver shift cable end bushing as well! This kit will really tighten up your shifting experience!

Fits the following years and models with five or six speed manual transmissions:

(The list above does not include all VAG vehicles that use the riveted forward pivot pin  WHT001413 and bushing 6Q0711067A that is compatible with this kit.)

Install:  Please note that you will need to remove the center console on your car to install this part. This is the most tedious part of the install process. Please understand that we do not provide instructions for doing this as there are several different cars that use this shift mechanism. A little research on YouTube will help you greatly in removing the center console. You will also need to mix up some JB-Weld or similar epoxy (not provided) to glue the provided aluminum drill bushing to the steel bellcrank to allow you to drill off and remove the original VW pivot pin rivet head. You will need a 5/16" or an 8mm drill bit. (A YouTube video detailing this are posted at the bottom of this page.) Once you drill off the pin's rivet head you might need to drill into the pin further with a 1/4" or 6mm drill bit to relieve tension of the pin on the steel bellcrank. Yes, it sounds complex but in reality it isn't too bad. Once the bellcrank is free of the pin the install of the new pin and bushings is pretty straightforward. Please note you will likely need to open up the hole in the bellcrank with your 5/16" or 8mm drill bit prior to installing it onto the Super Pin.

(No reviews yet) Write a Review 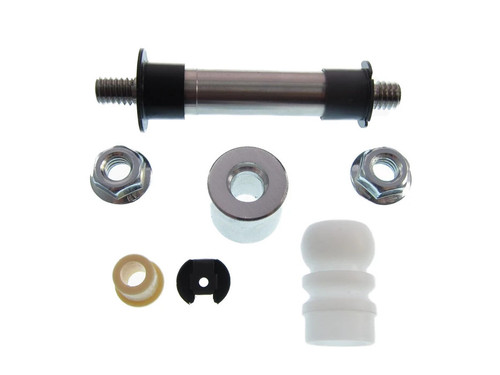